Why Is My Sewage Pump Not Working?

So, what are the main reasons that a sewage pump fails, how can you be aware of those potential faults, and what can you do to fix a sewage pump?

What Is a Sewage Pump? 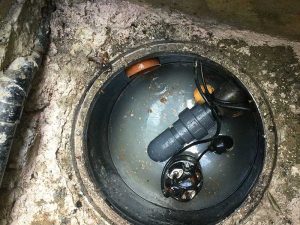 For many, a sewage pump is installed and then forgotten about. This page could well be the first time that some people actually read up on what a sewage pump is, so just in case, here’s what you need to know.

So, before entering the actual sewers themselves, your properties sewage will drain into your sewage pump. The pump itself is designed to hold this sewage in a tank until the occupancy level of the tank itself reaches a point that triggers a float switch.

The float switch is a mechanism in the storage tank of the sewage pump that tells the pump when to turn on, and to start pumping sewage away from your property. When triggered, the motor within the pump will turn on.

This motor causes the impeller inside the pump to turn, which creates a centrifugal force that pushes wastewater stored in the containment tank through the impeller itself (so any solids are broken up), before the sewage is discharged into the sewer system, or a septic tank if your property makes use of one.

The sewage tank itself is a pretty integral part of any drainage system within a property that relies on one – so what could go wrong with your sewage pump, and how could it be remedied?

The Most Common Problems a Sewage Pump Might Have:

If your toilet has started to back up then it’s likely that the problem is stemming from either a jam in the pipes leading to your sewage pump, a blockage in the pump itself, or a fault with a septic tank (if you make use of one).

You can usually tell when you are about to experience a backed up toilet: a foul smell will linger around your toilet even after flushing, bleaching and any other cleaning methods you might undertake.

This is because the sewage itself isn’t being flushed away properly, and instead it’s sitting within the toilets drainage system, meaning that over time it will build up and continue to smell.

This is not a desirable situation, and if you suspect that you are experiencing a backing up toilet then it’s important that you call in an expert immediately. Our engineers are capable of repairing and clearing blockages within your sewage pump should the blockage be found in there, or by treating and emptying your septic tank should the blockage be located there.

Realistically, there is no way that a layman could or should attempt to fix a blockage within a sewage pump that is causing a backed up toilet, just in case further damage is caused. Call out the experts, and feel safe in the knowledge that the matter is being handled by professionals.

Sewage Pump Not Switching Off or Running Too Long 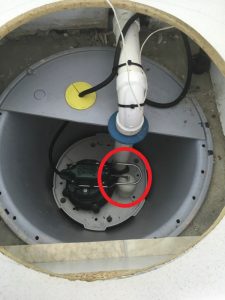 An example of a float switch

If your sewage pump has started to run consistently, or perhaps it is running far too long after it’s needed to, then maybe you have an issue with your float switch.

Your float switch is the mechanism that lets your sewage pump know when its time to flush out and pump away the sewage in your sewage pump. Usually, its triggered once the tank that stores the sewage reaches a certain level, which in turn turns on the pump itself.

Now, if that float switch were to become damaged or stuck, then it’s very likely that your sewage pump wouldn’t be able to either turn itself on or turn itself off.

In the event that your sewage pump isn’t able to turn itself off, you could be faced with a sewage pump motor that burns itself out. That’s because these devices aren’t designed or meant for constant usage, so if the float switch cannot return to an off position and your sewage pump is stuck on, your motor will be stuck trying to pump an empty tank.

Once that motor has burned itself out, then your sewage pump won’t be capable of pumping out the sewage at all – even if the float switch is triggered. What this means then, is that your basement is going to suffer from a sewage overflow and flood. It might not happen straight away, but it will happen if your sewage tank is incapable of emptying.

If your float switch is broken, and your pump isn’t able to turn on at all, then you are unfortunately going to be subjected to a sewage overflow and flood all the same. For the exact same reason as if the motor burned itself out: If the sewage tank cannot empty itself, it will fill up, and it will overflow.

Both of these situations can be easily avoided with regular and consistent maintenance from engineers experienced in the operation and familiar with the repair process involving sewage pumps.

Arrange for a maintenance schedule that works for you with our engineers, with visits planned around your calendar for your convenience, and never fall victim to unexpected motor burnout again.

A power cut is one of life’s unexpected challenges. They can throw everything into disarray, and if they are paired with a property that makes use of a sump pump or a sewage pump your property suddenly becomes at risk of a flood, or sewage overflow.

The reason for that is because many sewage pumps are connected to a properties power source, so in the event of a power cut, there is literally no power being sent to the pump itself to facilitate its use. In a power outage then, your pump is much more likely to succumb to an overflow.

These backup pump batteries can be invaluable when your property is without power, so if you believe that you could benefit from having one installed, get in touch with us today. 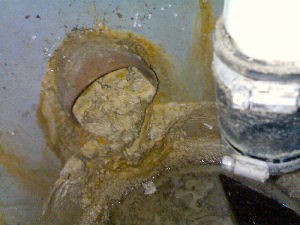 Your sewage pump is connected to the sewage system, which means it’s going to be relying heavily on pipework in order to both collect and dispose of your waste. With that in mind, there are plenty of reasons that your sewage pump might come into contact with a blocked pipe: there could be foreign elements in the sewage like sanitary products or grease that have clogged the pipes.

Or, it could be something as simple as water freezing in the winter, or even plant life extending roots into the pipe itself. Anyway, when it happens a blocked pipe is not ideal. Luckily, you can discover exactly what is causing your pipes to become blocked with the use of our CCTV drain survey.

Using modern imaging technology our team can explore your pipes remotely, and upon discovering the cause of your blocked pipes recommend a course of action to get your drains back in working order.

You can read more about our drain surveys here, or talk to our team about arranging a survey by calling 0800 019 9949.

A sewage pump is a piece of machinery with a lot of working parts, and therefore it is susceptible to wear and tear. With that in mind, it’s not out of the realms of possibility that your pump could break down due to it being used heavily and consistently.

These breakdowns are annoying and tedious, but they can be remedied and avoided. If your pump were to break down due to a failed part a trained technician would have no problem in identifying the broken part, and recommending either a suitable sewage pump repair or replacement to get your sewage pump back into working order.

You can always arrange this with our team on the phone, or by getting in touch online. Of course, the best way to avoid mechanical failure is by arranging consistent and routine maintenance that can diagnose and head off trouble before it strikes. Get in touch with our team today either by calling us on 0800 019 9949 or by contacting us online.