Its that time of year again. The rarest of rare events has happened (a few weeks of good weather!)  but many peoples thoughts are turning to that all important break away, jumping on a plane and heading off abroad. Before you pack your bags though spare a quick thought for your hard working friend in the basement.

Right now, we have extended our £150 offer for pump servicing so keeping your basement dry need not cost the earth.  Why not give us a call on 0800 019 9949 to arrange to have your sump pump serviced and give you that peace of mind that your faithful friend is in tip top condition for the seasons ahead.

How much dirt and grime in a year? 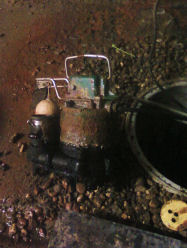 When our engineers take a pump out to clean most of our customers are shocked at just how much dirt and build up of scales can happen over a year between “Clean and Checks”.

As the photo here shows, this pump  had a service only a year ago and in that time the basement pump has given faithful service behind the scenes to keep the basement dry. However, the years hard work has taken it’s toll and dirt and scale deposits can lead to problems with the pump.

To some people the basement pump is a fit and forget item and only remember their faithful hardworking friend when it breaks down and the basement becomes damp. Remember, out of sight shouldn’t mean out of mind don’t forget how hard it works for you! Treat it to a “Clean and Check” today!

Arranging a sump and pump service is easy!

To have your basement sump and pump unit serviced simply call 0800 019 9949 or complete our on-line service request form and we’ll contact you to arrange a convenient time for your pump to be serviced. What could be easier?

Don’t forget to have your basement pump serviced! 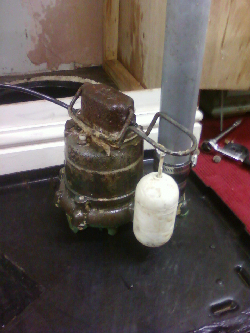 We all tend to forget how hard electrical equipment works whilst it’s working, but when the unthinkable happens and it breaks down we start to panic! Just think if your boiler broke down in the dead of winter!

Your basement sump and pump unit is is no different, as limescale builds up on and around the pump and in the sump this can cause the pump to operate at reduced efficiency and ultimately could lead to an untimley breakdown when you least expect it.

An annual ‘Clean & Check’ will help to keep you sump pump unit in tip top condition.  The photo to the left shows a sump pump unit  after one of our engineers has serviced the pump.  Can you really afford not to have your sump pump unit serviced?

Arranging a sump and pump service is easy!

To have your basement sump and pump unit serviced simply call 0800 019 9949 or complete our on-line service request form and we’ll contact you to arrange a convenient time for your pump to be serviced. What could be easier? 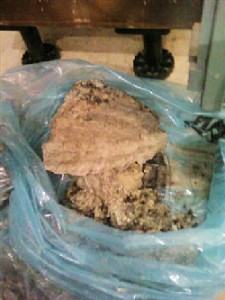 One of our basement pump engineers visited a  property recently after we received a phone call from a concerned customer in London worring about a bad smell in her kitchen that seemed to be coming from the basement.

Upon arrival at the property there indeed appeared to be an odour coming from the basement but only upon opening the basement pump did the engineer find the source of the odour. Fatty deposits in the water from the dishwasher were found to be clinging to the pump and float switch (See picture).  If  left untreated this would  have caused a potential flooding problem as the float switch would become too heavy and not rise with the water level. The float switch detects the amount of liquid in the sump and then activates the pump to remove the liquid from the sump chamber and avoid flooding.

On the base of pump the inlet holes had also become blocked with fatty deposits which would result in the water not being able to be sucked up by the pump and possible flooding of the basement had the owner not called in the Basement Sump & Pump Co to perform a ‘Clean & Check’ on the system.

Thankfully the relieved homeowner was spared a flooded basement!

serviced you may also be invalidating your guarantee! Simply call 0800 019 9949 or complete our on-line request form for more information.

The Basement Sump & Pump Co - Pump Servicing
4.0
Based on 3 reviews

lewis barwick
19:07 06 Jul 18
I called up for a service which was promptly booked in. Mark was friendly and knowledgeable. I will definitely be... having you back next year. Many thanks, Lewis.read more

alan holmes
09:59 28 Jun 18
Mark arrived early, protected floor surfaces and carried out the service with good knowledge of the site from doing the... initial installation and previous service visitsread more
See All Reviews

How Does A Sump Pump Work?

What is A Macerator Pump?